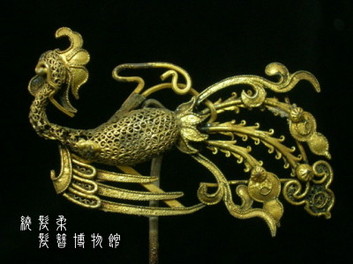 Apart from the special meanings of the designs, the craftsmanship on the hairpins can also demonstrate the level of the artistry in that dynasty. No matter whether women were rich or poor, they all used hairpins. The hair ornaments in the rich family can show the top level of craftsmanship in that dynasty. We can see every kind of craft skill on the old hair ornaments in ancient times. The most popular art is meticulous metal work. The social statuses in ancient times were very clear, so we can see very high quality ornaments made of gold and silver thread – filigree work. Beside the metal work, we can also see carved jade objects. Jade carving has a very long history in China. Chinese jade is any of the carved-jade objects produced in China from the Neolithic Period (c. 3000–1500 BC) onwards. The Chinese regarded carved-jade objects as intrinsically valuable, and they metaphorically equated jade with human virtues because of its hardness, durability, and purity. Not only was the skill very good but also the art was very delicate. They could make a lot of complicated patterns on one object and used this skill to decorate hairpins. Therefore, they used a combination of high quality jade and exquisite craftsmanship to make hairpins of very high value – both artistically and monetary.

Although the glass craft was not well developed in China, we still can see several objects made of glass for daily use. There must be a reason to start any art or craft. Apart from the cultural desire for new and fashionable objects for daily use there must also some practical requirements for use before the objects were made. The hairpin is one of the best examples. Rapid evolution from a simple pin to secure hair in place into more and more elaborate forms. It is also quite possible that originally the pin was meant to be invisible or inconspicuous – it was the styling of the hair that was important. As pins became larger and more exotic then it is likely that the hairpins became more important than the hair they were securing. As another example, the phoenix headgear which a bride traditionally wore evolved from