Hard tissues are animal parts that are hard and durable - they survive even after the animal has died. Hard tissues include bone, antler and ivory which are mineralized tissues; and horn or tortoiseshell which are made from keratin - the same material that makes up your hair and fingernails. We see several different kinds of hard tissue used on hairpins as decoration. Combs are often made from horn or tortoiseshell because these materials are soft and flexible and are therefore less likely to damage the hair or scratch the skin. 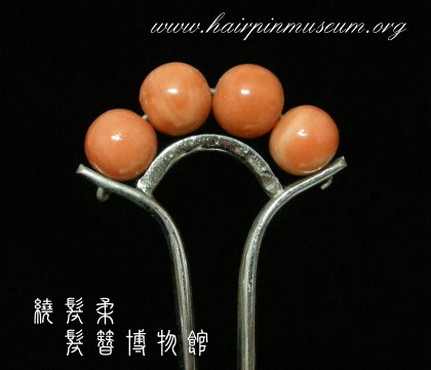 Coral is a mineralized tissue made by sea animals. The most commonly used corals are the brightly coloured red and pink varieties. Coral is now an endangered specied so the Hairpin Museum only collects antique coral decoration. 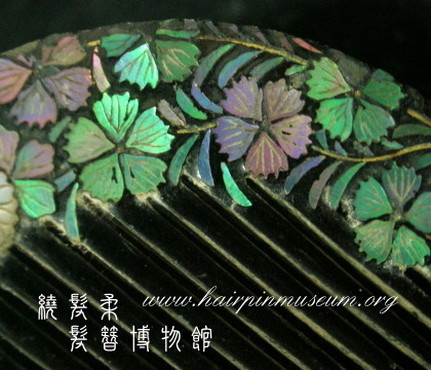 Shell is another mineralized tissue made by sea creatures. Its scientific name is nacre but when used as decoration is called mother of pearl. The most commonly used mother of pearls comes from the pearl oyster, freshwater pearl mussels, and abalone. Mother of pearl is thin and usually used as an inlay in other materials such as wood or horn. 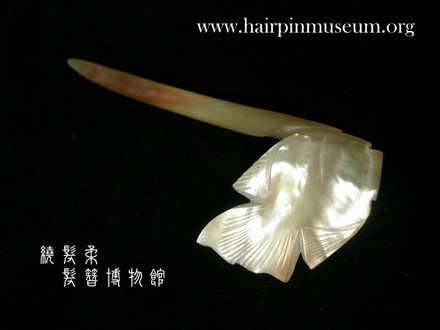 This shell hairpin in the shape of a fish is made from a large seashell. It is made from a spiral mollusc shell and not from a flat shell like an oyster. Shell is quite fragile and easily broken. The beautiful lustre and colours are created by light refracting inside many thin layers of nacre below the surface.


This hairpin was a special donation to the Hairpin Museum from a foreign admirer. 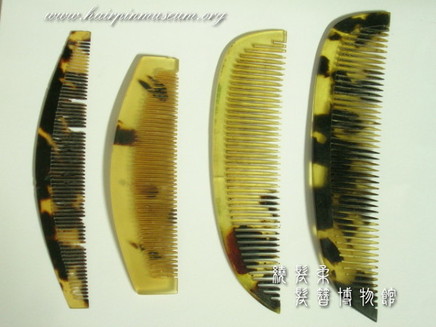 In the past horn and tortoiseshell were widely used to make combs. The materials are soft, transparent and do not make static electricity like modern, plastic combs. Today, it is still possible to buy cow horn combs in Asia. It is now illegal to use real tortoiseshell because the turtle is an endangered species. The Hairpin Museum only collects antique combs in this precious material.

One hundred years ago cow horn was dyed or coloured with lacquer to imitate the rarer tortoiseshell so that more money could be charged for the combs. Both horn and tortoiseshell can be damaged by insects that like to eat the protein-rich keratin.

Here are four antique Japanese combs. The two on the outside are real tortoiseshell. The two in the centre are really cow horn coloured with lacquer.